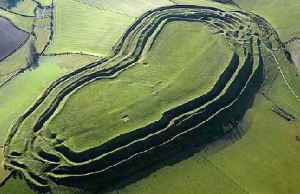 One of the things we learned over the years of doing Earth energy work was how our pre-Celtic ancestors worked with the Earth and how they really knew that they lived on the body of the Mother. They were part of the Mother, they were her children.

Their sacred places, small settlements, massive hillforts and stone circles were all representative of the Balance of male and female. They lived that reality of Balance. Through working with these places I recognised that many of them are built to represent the female body. Sites that were significant places for maintaining the balance of the surrounding countryside, or places of power where people went to learn how to be a guardian of a sacred place, all were created to replicate the body of a woman.

Through working with these places I recognised that many of them are built to represent the female body. Sites that were significant places for maintaining the balance of the surrounding countryside, or places of power where people went to learn how to be a guardian of a sacred place, all were created to replicate the body of a woman.

Banjo Enclosures, such as that at Itchen wood and Micheldever Wood, Coldridge Woods, Danebury Hillfort, Fosbury Hillfort, Woolbury Camp and Maiden castle. Stone circles such as Stonehenge, Avebury, etc, all represent the body of the Great Mother. At different points in the year, these places were fertilised, by priests and priestesses, who knew how to channel the energy/light of the male fertilising principle, the Solar energy, through their bodies and into the earth. This was like a great sexual joining of male and female, designed to ensure that the crops would grow every year and feed their people, and that the balance of the Earth’s energies would be maintained.

This was not an empty ritual, but a real energy-working of the serpent-lines that ran between sacred places and rivers, human settlements and burial sites.

When I first began to work with Danebury Hillfort with Chris, we found ourselves, at the beginning of February a few years ago, standing on the highest point in the middle of the settlement. 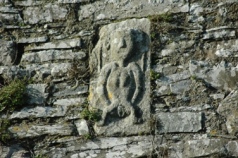 I became aware of two giant hands pulling open a split in the earth beneath my feet. Inside the resulting diamond-shaped space there was darkness. Then the solar light poured down through us, as we stood above this empty dark space, and it filled the space with solar light. Then I saw the Sheelagh-na-gig, and I understood what it meant!

The Sheelagh was the image of the Great Mother at the end of winter, and the beginning of spring, opening herself up to the fertilising energy of the sun, where she would, in nine months time, produce the crops that fed the people. She would be re-energised. Think of all the fairy tales where the ‘ugly old witch’ takes the energy of youth to make herself young again. This is an echo of an ancient ritual of life-bringing solar energy, re-energising the old winter season and bringing the new energies of spring and new growth.

When we had finished we walked around the outside bank and all I could feel was the storage of corn! I took a photo on my way out, of the information board. I realised that I was looking at the body of a pregnant woman. The ‘Defensive’ ditches are her vulva! The people lived within the body of the Mother. The same applies to many other settlement sites around the country.

These places were significant fertility sites, which not only fed the surrounding areas energetically but also physically. Storing corn in large pits in the chalk kept the corn safe for Winter, but also kept it energised.

Sites, where the stone carved Sheelagh-na-gigs were found, were earlier fertility sites, and the early Christians, without their rigid fear of sexuality, probably knew that, so they incorporated the Sheelaghs into the stone-work of their chapels, just as they used the stones from stone-circles as the corner-stones for new churches on older, sacred sites. They were not destroying these sites, in their eyes, but re-dedicating them. It was only later, after the Synod of Whitby, that this knowledge was slowly destroyed.

The smaller Banjo enclosures were like smaller womb-like places, that also fed the surrounding countryside and brought fertility to the local inhabitants, but these smaller enclosures seemed to be an introduction from a foreign peoples, from Northern parts of Europe. They brought their knowledge of working with the earth with them when they came. I don’t know who these people are, but every time we have worked with a Banjo enclosure we have picked up the energy of immigrants from Northen countries, Saxon/Scandinavian? People who married into the communities or settled by themselves.

The Banjos, were often smaller satellite communities of larger Mother sites, and energetically connected to the larger sites. All of these places were connected. The big sites fed the smaller sites. But what is also significant about these banjos is the ‘Access point’. These points are always at the entrance to the avenue of the enclosure and the energy which enters the enclosure is regulated from here.

Spring-fed pond in Fosbury during Winter.

Our ancestors knew exactly what they were doing when they created these power places and they understood how to keep the balance of the male and Female in every level of society. Sometimes, in larger hillfort sites, the energy point is in the spring-fed pond within the communal space. Springs have always been seen as emerging from the body of the Mother, and therefore filled with her life-giving essence. Everything these people did was done in a sacred way, in their sacred spaces of the Mother.

Different Mother sites are aligned with either Spring or Summer. Winter vortices tend to be smaller, and sometimes small spring vortices can be close to the Winter ones.  Fosbury Hillfort, in Wiltshire is a wonderful, Summer Hillfort. Just being there is a nurturing experience.

I was introduced to Fosbury, a 26 acre site, by a fellow Archaeology student named Matt Nichol and he felt incredibly protective of the site, without really realising why! The first time he took me there I was blown away by the love I felt from the site. I knew, without a doubt, that the people who had lived in this settlement had known abundance and safety. Even going there in Winter, with snow all around, you don’t feel the cold. You feel completely nurtured and secure and you know that all of your needs will be met. The feeling at the site is of a fecund mother, full of all the good things that nature can provide. A place of security and love.

Every time I went to do work at this site, re-connecting it to the smaller Banjo enclosure of Coldridge, a few miles away, I was always greeted by the great loving energy there. Fosbury ‘fed’ the smaller Banjo enclosure with red energy, which wrapped itself around the small enclosure, feeding it with its life energy, like a child connected by an umbilical cord. This was a common occurrence, with larger Hillforts connecting to smaller banjo Enclosures.

At the bottom of the Coldridge Banjo, there are two vortices, side by side, a Spring Vortex and a Winter Vortex, each active at that time and all connected to Fosbury. Nothing works in isolation All are connected. And all play a different role within the larger network of energies.