I went to a lovely woods last night for a walk. I wanted to visit the first tree I had ever connected to, so I went in search of it. The woods were magical and as soon as I walked into them the energy surrounds me. The Dryad there, ancient, spreads its energy-field over the entire  area. You can feel it within 10 metres of walking along the path into the woods.

It had been sixteen years since I had first seen it, so when I caught sight of it again I felt so excited! It was still here! It felt the same as finding a long lost treasure. But its branches were bare and ivy grew up all around it. (You can just about see Cheryl hugging the trunk on the left of the tree!)  I walked up to it and could feel its energy. It made my skin tingle. I felt it welcome me as a sister. I stood with my back to its trunk and I felt very energised. Initially all I could see was light around my vision, then I saw images of the Aran Islands and a gold key like a small arrow. I felt like the tree was telling me to go back there.

Then the energy shifted and I felt the familiar pulling in my Hara/centre.  I was feeling the tree’s massive energy. My whole body felt electrified. Then I saw, and felt, the tree place a cloak of its bark around my shoulders, like a cloak. It felt like protection and the essence of its ‘tree-ness’. Then I saw myself writing, and the tree said ‘write about us’.  They wanted me to share my experiences of them with others. No problem! 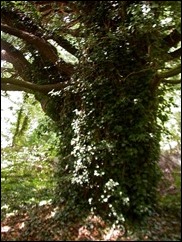 On the way back I watched a large hawk trying to steal the eggs and babies of blackbirds in their nest. The hawk was making a huge screeching racket and the blackbirds were trying to get rid of it, loudly. Each time the hawk stopped on a branch, the blackbirds would chase it off.  They preceded me almost down the entire path! What was the message there, I wonder? I love Blackbirds and their songs. Every-time I hear them singing, it resonates inside of me and I feel comforted by it. My whole energy softens and I feel safe. It always felt as though they were very healing birds. So what/ or who, is this predator, come to steal their creations, their babies? Something I need to work on resolving obviously! Although I think I might have a good idea…

I went up to the woods again today, this time with my friend Cheryl. She followed her ‘gut’ until we came to the tree. The energy today was very different, perhaps because I had already connected to it, although its energy was just as palpable as we entered the woods. This tree has a huge energy-field. This time its messages were different. The only growth visible was the ivy climbing up around it. The rest of the tree seemed to be dying; only tiny outgrowths were visible, quite high up. The tree communicated that although it was coming to the end of its life, it was time for its work to be passed to the younger trees. As he died, they grew, and this felt perfectly alright. It was just the way of tree-things. But we were struck by the way the ivy was obscuring the tree itself. We could not see the bark because it was covered  in ivy. It was like our true selves being obscured by clinging people and issues. They grew and thrived while we died. Food for thought, to be sure! 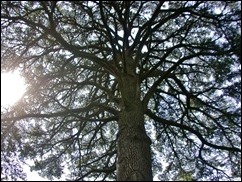 Once we were finished here we walked back along the path and came to a lovely old Spruce (I think). We stayed under this tree for a little while and it felt so nurturing.  It looked like it had been grown for wood, but never used, so it has just kept on growing. It was a very peaceful place and a lovely place to come and meditate.

Walking further along we came to three more old yew trees, all in a row. We tuned into the larger of the three and I received the message “ Give to the Givers.” Of course, in giving to the givers they will then give to more givers and so on. There is no point in giving to the takers, they will not share it, but will hoard it and use it selfishly. So simple really!

We received a lot of very subtle messages in these woods, and some not so subtle. I will definitely be going up again. If you want to go up yourself, the woods lie alongside Lainston House Hotel. It’s probably part of its lands. There is a pathway on the left of the main Stockbridge road from Winchester, which is where we start from, just across from where the road from Littleton joins the Stockbridge Road. There is a little parking space there too, across from Apley House, the last house on the Littleton road.

There is also a ruin of a 12th/13th century chapel in the hotel grounds so the Lime tree is probably that old, if not older. Cheryl and I are going to go for afternoon tea there, so we can check it out!!!