This phrase popped into my head while I was cooking this evening, followed by the voice of a young girl saying… ‘how predictable’. I was sure I had heard it before and it seems, on google-ing it that it was Eckhart Tolle who said it. 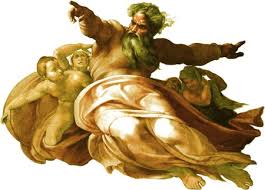 However, I have no idea who the girl is or why she was being so disparaging about male grandiosity.  Apart from the obvious of course!  But it has made me think. I remember years ago reading the Seth books, channelled by Jane Robert’s and he had a lot to say about how man projects all of his ‘bad’ stuff onto God. Simple projection!

Although as I am writing this I wonder why exactly this young woman, whoever she is, made the statement? Perhaps I need to be thinking a little differently about it, or even deeper. And why was it so predictable that men should do that? But it is interesting that they do. Women didn’t make God in their image. But why not?

Making God in man’s image is nearly like giving  men carte blanche to do whatever they please. If they are God then they have complete power over everything else.

Perhaps that is why it says in the Bible that God gave man dominion over all the earth? Do men collectively believe that they reside in a dimension closer to God while women and all the rest of creation live on the Earth…beneath them?

I can remember this from my days in the Hare Krishna’s. Women were not deemed to have a soul, only men. Women could get to ‘heaven’, or ‘krishna-loka’, but if one of their children left the movement then she had no hope. She was completely responsible for her children’s spiritual development. The onus was on her to be impeccably behaved at all times. I can remember feeling shamed into sitting the right way, not laughing too loud, always wearing my sari over my head so it was covered. When we passed the ‘boys’ in the temple we had to look down and not meet their eyes. Everything was about their spiritual development and we were made responsible for it. Everyone was celibate but as women we had to make sure we did not ‘agitate the boys’. Agitating the boys meant not turning them on!!! Their focus on celibacy seemed to be paramount and our responsibility as women was to make sure that they achieved it! Why they weren’t responsible for it themselves I will never know!!! And why was I shamed into believing that if they were unsuccessful that it was somehow my fault, just by virtue of the fact that I was a woman and I was ‘there’. I was covered from head to toe, so how was I to blame?

It was for that reason that I left the hare Krishna’s. I was so fed up with being blamed for men’s sexual weaknesses and being made responsible for their spiritual development. Surely the whole point was to learn to control their own urges and recognise that it is their own responsibility. We women had to learn to curb our behaviour BY OURSELVES. Why couldn’t they?  And are they saying that God is also  intrinsically weak?  If they are made in his image then does that also mean that HE (?) has no control either? And yet they try so hard to get to God but why  bother, if God has no control over HIS creative urges. They obviously do not think very much about the things they say and which they claim to come from ‘God’! If they actually used their minds they would have to rewrite the bible!

Personally if I thought that God made man in his own image then I think I would rather die now!  What would  I have to aspire to? As a woman on a spiritual path if all I am aspiring to is to become devoted to a God who has no control over himself, then I am truly living in the wrong reality! But then if God created all realities then I am truly stuffed!

What is the point of being a woman at all if only men are important in the whole of creation? Oh yes, procreation! To provide the world with more men, who in their turn are made in God’s image!

It seems an almighty (Excuse the pun) mission is needed here. To recognise that men are not made in God’s image. If  ‘God’ is a human construct, filled with all of man’s unwanted and disowned parts of himself, then yes he is made in his image. He is God the controller. God the punisher. God the angry judger of man’s actions.   The creation of ‘God’ is a fabrication. Just another angry God like all the rest of the Gods which have ever been created by small minds. Man needs to take responsibility for the parts of himself which he does not want to ‘own’.

This ‘God’ is just another archetype and one which seriously needs remodelling!!!  It is not an archetype I wish to embody. ‘God’ is just another aspect of the Source, the energy which IS everything. This consciousness does not have a name it just IS. We are ALL part of this consciousness and therefore all equal. We all have parts to play in the greater scheme of things and no-one sex, or animal, or plant or mineral is above or below anything, or anyone else. We are all a part of creation and therefore need to recognise that we all have a right to live as part of that creation. It is not for any one man or group, to tell anyone else how to live and love. It is not for any one man to judge another’s actions, especially when  they do not see inside that person. They do not know know why that person is alive today and what he is learning! How could they? They do not even know their own plan or purpose of existence.  So how can they afford to judge?

If man owned his ‘bad’ parts instead of creating a vessel to contain them, only to continually feel punished by the container,  we would have a healed world!

And surely that is a world to aspire to?